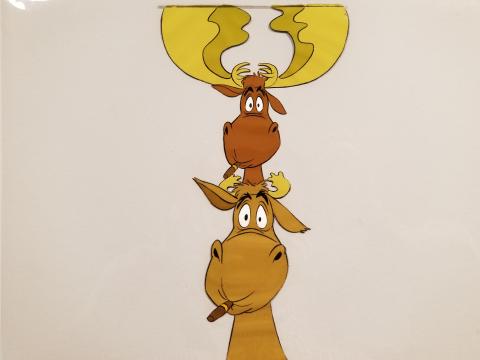 This is an original production cel from the Walt Disney Studios animated film Two Happy Amigos (1960). This comical hand-painted cel features two moose with cigars in their mouths, after receiving them from Jose Carioca. This short was featured Donald Duck and Jose Carioca and was part of an episode of Walt Disney Presents. The untrimmed animation cel measures 12" x 16" and the very large image measures 11.5" x 6". This image appears about 8:35 into the short. The final image shown is a screen grab of the scene that is shown for reference purposes, it is not a physical print included with this production cel. The cel is in very good condition with minor paint damage at the very bottom of the image with a horizontal crack and a little lifting in the lower moose's neck.