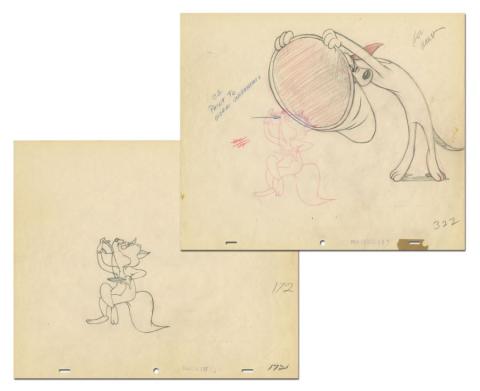 A pair of production drawings from the MGM Studios animated Droopy Dog film Out-Foxed (1949). Featuring one of the hunter's ambitious dogs unsuccessfully attempting to catch Reginald the civilized fox, the drawings were created at the studio to be used during the animation process. Both drawings have the same number which likely means they would've been paired together during the animation process. There is a faint outline of Reginald in the first drawing featuring the hunting dog that matches with the second drawing. Measuring 10.5"x12.5" overall, with the character images measuring 7.5"x9" and 4.5"x4", the drawings are in very good condition with minor edge wear and a spot of yellow paint on the surface of the dog drawing.