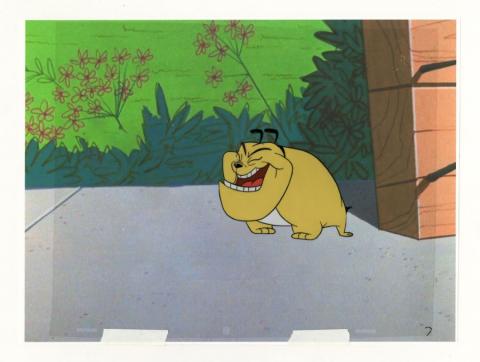 An original production cel from the MGM Studios animated film The Cat's Me-ouch (1965). Featuring the miniature dog Jerry mail-orders, the cel was created at the studio and used during the animation process. The piece is an actual frame of animation that was photographed and appears in the cartoon. Measuring 9"x10.75" overall and with the character image measuring 3"x3.5", the slightly trimmed cel is in very good condition with some dots of paint stuck to the surface of the cel, including on the character, some light creasing throughout, and a light fold across the top left corner. The cel is paired with a color copy reproduction background.