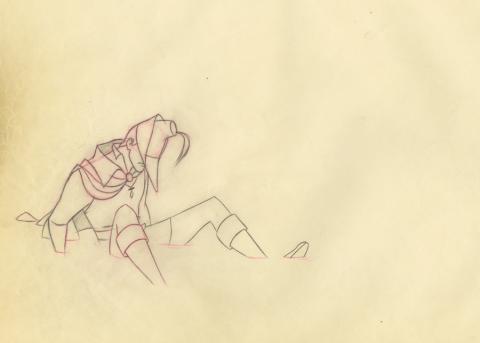 A production drawing from the Walt Disney Studios animated feature Sleeping Beauty (1959). Featuring Prince Phillip as he sits in the water talking to his faithful horse Samson, the drawing was created at the studio by Disney Legend Milt Kahl, and used during production. The animation seen in Sleeping Beauty is a masterful example of the Nine Old Men's talent, and Kahl's draftsmanship is a prime example of Disney Studio's superior talent. Measuring 12.5"x15.5" overall, with the image itself measuring 4.5"x7", the graphite drawing is in very good condition with page wrinkling near the edges.