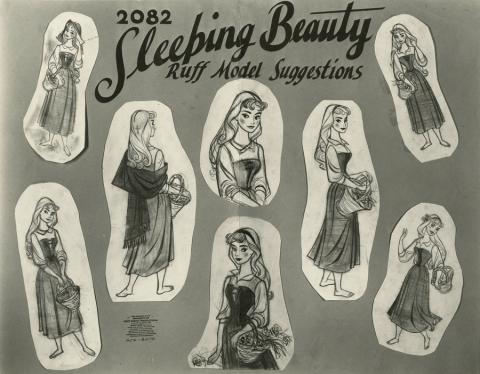 An original photostat model sheet from the Walt Disney Studios animated film Sleeping Beauty (1959). Featuring early rough suggestions of Princess Aurora in her Briar Rose peasant clothes, the model sheet was created at the studio to be used during the animation process and used as a reference tool for character consistency. Early model sheets with rough imagery provide insight into the seldom seen development of character design and capture the pure artistry that goes into a film's creation. Measuring 11"x14" overall, with an image area measuring 9"x11.5", the model sheet is in very good condition with light wrinkling around the edges and a fold down the center.