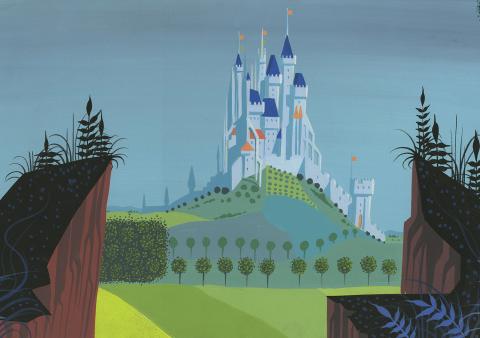 This is an original concept painting from the Walt Disney feature film, Sleeping Beauty. This stunning painting was created by Disney Legend, Eyvind Earle, and was used during the development of the film. The overall piece measures 8.5" x 23.5" and the image takes up the entire illustration board. Eyvind Earle has continues to be one of the most respected and sought after artists from the Disney Studios, and he was just honored as an official Disney Legend in August of 2015. This piece is a gorgeous example of his use of color and his abstract design sense. The piece is signed by Eearle in the lower right corner as seen in the additional close up image.