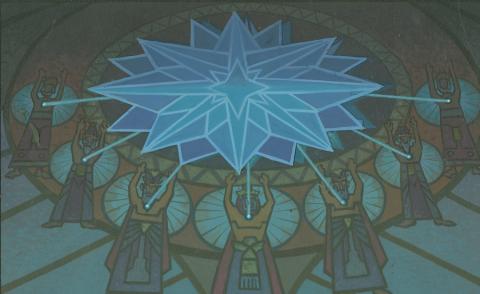 This is an original background color key concept from the Walt Disney Studios production of Atlantis: The Lost Empire (2001). This hand-painted concept art features some of the ancient artwork of Atlantis and was created at the studio by Joaquim Royo Morales, and used during the development of the film. Background color keys are used when the director is determining the color pallet of the scene's background environment. The overall measurements of the piece are 6.5" x 9" and the image itself measures 4.25" x 7".This piece also has a cel overlay for the star imagery that overlaps where the star is positioned on the board painting, possibly to make the colors more vivid.