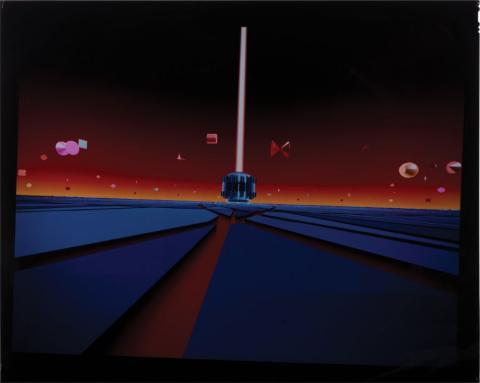 An original Ektachrome color transparency cel from the Walt Disney Studios live-action film TRON (1982). Featuring the background landscape outside of the game grid after the MCP battle, the Ektachrome cel was created at the studio and used to create publicity imagery during promotion of the film. The imagery captures a pensively euphoric scene in the film that is both dystopian and magnificent. The powerful imagery was perfect to use as a backdrop in publications with the characters' imagery placed in front of the unique landscape. The promotional imagery created with the background helped to capture the public's attention with never before seen artwork. The groundbreaking film predated modern day computer animation and effects, requiring the unique lighting effects to be hand created frame by frame. The backgrounds that this piece was stylized after utilized these techniques, but are exceptionally rare as few of them would have been produced. This painstaking process was only used for TRON, making the film's effects artwork a special piece of movie history. Measuring 16"x20" overall and with the image measuring about 14"x18.5", the transparency cel is in fine condition with a few small dings throughout from handling.