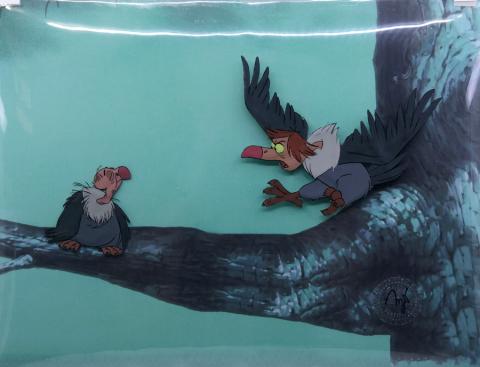 An original pair of production cels from the Walt Disney Studios animated film The Jungle Book (1967). Featuring Buzzie and Ziggy, the hand-painted cels were created at the studio and used during the animation process. The piece went through Disney's art program, as is evidenced by the seal in the corner, and the cels were paired together by the studio's art program, even though the cels are from separate scenes in the film. Measuring 12.25"x15.75" overall and with the character image measuring 6.5"x12.5", the cels are in very good condition with rippling in the image, staple holes in the top left corner from the studio's preparation, and a slight curl to the cel. We have paired the cels with a color copy reproduction background.