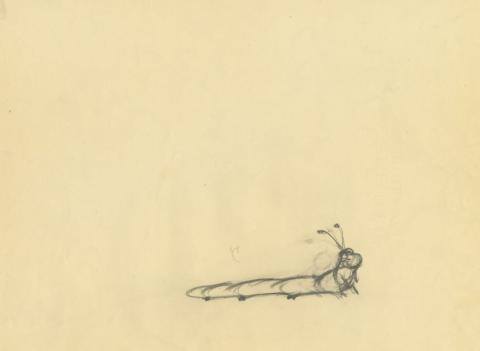 An original production drawing from the Walt Disney Studios production Lady and the Tramp (1955). Featuring a fantastic image of the caterpillar who sneaks past Trusty on the porch, the drawing was created at the studio and used during production. Disney Legend John Lounsbery, one of the Nine Old Men of Walt Disney Studios, animated this scene and created this drawing. Measuring 12.5"x15.5" overall with the image itself measuring 2"x4.5", the drawing is in fine condition with edge wear, including notable torn sections along the edges due to the paper becoming fragile from age.