Lady and the Tramp Production Cel & Background Setup - ID: may22339 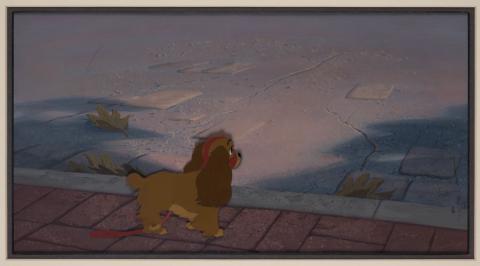 An original production cel and background setup from the Walt Disney Studios animated film Lady and the Tramp (1955). Featuring Lady contemplating how to escape Aunt Sarah's muzzle, the hand-painted cel was created at the studio and during the animation process. The cel is paired with a stunning master background of a city street that was created for the film's production, and adds to the feeling of despair seen in Lady with this setup. Each piece is an actual frame of animation that was photographed and appears in the movie. Measuring 14"x20.25" framed with the mat opening measuring 7.25"x13.75" overall, and the character image measuring 3.25"x4.5", the artwork is in fine condition, unexamined out of frame.