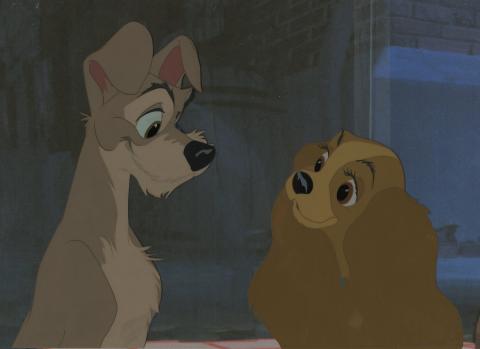 This is an original production cel set-up from the Walt Disney Studios production, Lady and the Tramp (1955). This set-up features Lady and Tramp and was created at the studio and used during the production of the famous Bella Notte sequence from the film. Lady and Tramp are on separate cels but are from the shot in the sequence just after Tony seats the two pups, and just before he goes into the kitche to talk to Joe while he's making the spaghetti. Although this is before the spaghetti is fed to the dogs, the imagery depicts a very intimate shot when they are gazing at each other that is essentially unmatched. The overall measurements of the piece are 8" x 11" and the image itself measures 6.75" x 9.5". The trimmed dimensions of the cel and staple holes along the top edge indicate that this piece was originally prepared by the studio for sale at the Disneyland Art Corner. We have printed a reproduction background from the matching scene to better present the piece, and the piece will be delivered with a custom prepared giclee prined reproduction, including a background overlay of the table layer. Lady's cel is in excellent condition, Tramp's cel has a spot of paint damage that will be professionally restored at the time of purchase at no additional fee.