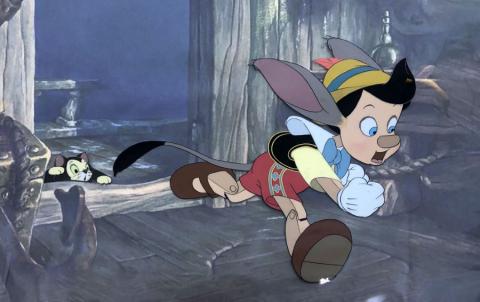 An original production cel from the Walt Disney Studios animated film Pinocchio (1940). Pinocchio represents the curiosity and mischief present in every child, and his adventure exemplifies this most when he is frantically saved from his consequences by Geppetto. Featuring Pinocchio and Figaro, the cel was created at the studio and used during the animation process, and is an actual frame of animation that was photographed and appears in the movie. Most Disney features utilize multiple cel layers for scenes with multiple characters, while this rare and charming piece actually features both characters on a single cel layer. The trimmed cel measures 9"x12.5", with the image area measuring 7"x9.5", and is in fine condition with light line rippling to the cel. It has been paired with a color copy reproduction background for presentation purposes.