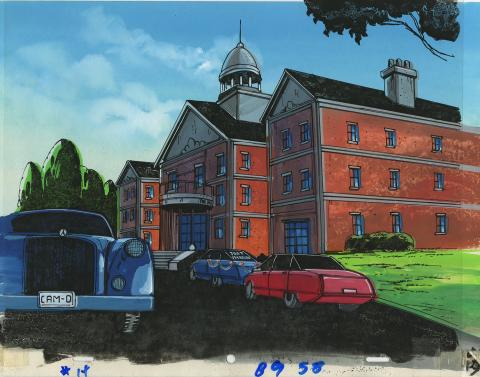 This is an original production background from the Marvel Studios animated series, X-Men (1992-1997). The background features a fantastic image of Professor X's Mansion that was hand-painted at the studio and used during the production of the episode, 'Til Death Do Us Part: Part 1. The untrimmed background measures 10.5" x 14.25" and the image takes up almost the entirety of the illustration paper. The linework for the image is created on a cel overlay. The piece is in very good conddition and the image is seen at about the 4:03 mark of the episode, just before Jean throws the bouquet at her and Scott's wedding reception. This image is a held image that does not have any character imagery in front of it in the episode.