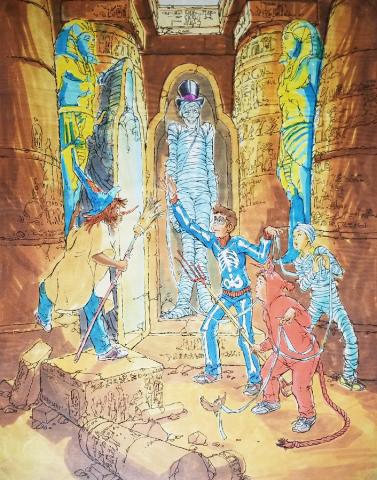 This is an original concept drawing from the Hanna Barbera Studios production The Halloween Tree (1993). This concept features the boys discovering Moundshroud in a tomb as they see the Egyptian history of Halloween. This image would be from early in development as it features only four boys in search of Pipkin, but does not have a girl, as the actual film features. The original image was created by illustrator Floro Dery, who was the character designer for this film. This piece is created in a traditional comic style with all of the color accomplished with marker on paper and the line work done on a xerox cel overlay. The overall measurements of the piece are 26.75" x 22.25" and the image itself measures 23.75" x 18.75". The concept was likely used as a pitch piece when the studio was first developing the film and it was mounted to mat board with spray mount adhesive. The piece is in good condition with wrinkles in the lower corners on the cel and spray mount adhesive on the backside of the paper layer which has created some rippling in the paper.