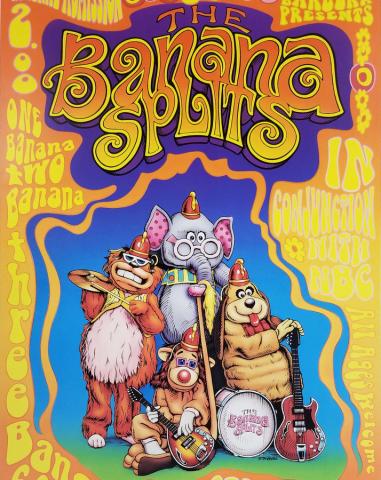 The Banana Splits entertained audiences with their combination of animated shorts and live action costumed antics during the late 1960s. The beloved Sid and Marty Krofft show lived on in the memories of many children who grew up with the slapstick humor and creativity that was on display in the show. In 1996, Warner Bros. produced this poster to celebrate the then 30 year old program, and sold these posters exclusively through the Warner Bros. Studio stores. The imagery features the four main characters surrounded by a barrage of psychedelic verbiage promoting a performance at The Shrine on September 7th, 1968 (the day that the show first premiered). The poster is created in a traditional concert tour poster size and style. The poster measures 31" x 20" and is in excellent condition. These posters have not been sold publicly since the closing of the WB Studio Stores. The poster has been stored flat, and it will ship rolled in a poster tube.