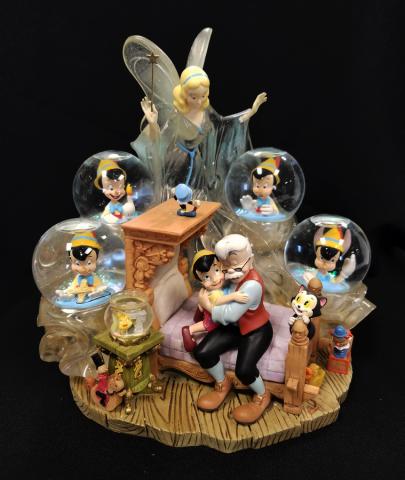 This is a limited edition snow globe created in 2004 based on the Walt Disney Studios feature film, Pinocchio (1940). The snow globe features the Blue Fairy overlooking Geppetto hugging his "real boy" son, Pinocchio, and also displays four milestone moments from the film in each of the small snow globes. More of Geppetto's woodworking creations are strewn about the floor, along with his lovable pets, Figaro and Cleo, admiring the father and son. Don't' forget, Jiminy Cricket is here too, seemingly talking to the Blue Fairy. The snow globe measures 10" x 7.5" x 9.5" and was created by Disney Auctions of resin and glass. The snow globe is in excellent condition.