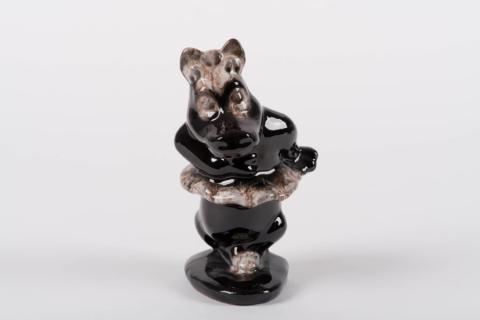 A dancing hippopotamus ceramic figurine created in the 1970s. Featuring a charming pose of Hyacinth, the figurine was made by Canadiana Pottery of Ingleside, Ontario in Canada. The composition of the piece is clay from the Collingwood region, and the glaze has a drip design. Measuring 4"x4.25" and 7" tall, the figurine is in good condition with minor imperfections in the glaze. Canadiana Pottery figurines were licensed by Walt Disney Productions through a contract with Alfred Dube, who founded Canadiana Pottery in the 1960s after leaving Blue Mountain Pottery. Alfred Dube had contacts at Walt Disney through which he was able to obtain licensing for production of Disney-themed items.