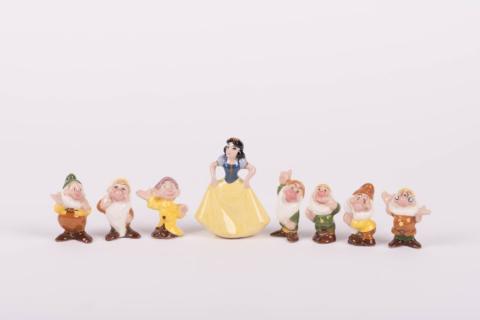 A set of eight ceramic figurines inspired by the 1937 Disney Studios film Snow White and the Seven Dwarfs. Featuring all eight of the titular characters, the set was produced by Evan K. Shaw Pottery in the late 1940's or early 1950's. Snow White measures 1.25"x2.5" and 3.25" tall, and the dwarfs measure 2" at the tallest, 1.5" at the widest. The set is in very good condition overall with some crazing throughout. Through the 1940s and 1950s, the Evan K. Shaw Pottery company and its sister companies, Metlox and American Pottery, produced a wide range of ceramics. In 1943, they were granted approval as a licensee to produce a range of Disney characters. These companies are no longer in business, and their highly desirable figurines are increasingly rare.