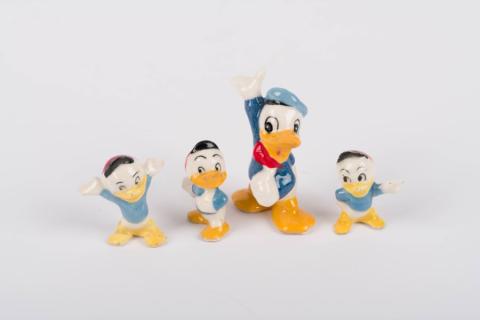 A ceramic figurine set of Donald Duck and his nephews by Evan K. Shaw Pottery. Featuring exquisite details on the individually sculpted characters, the figurines were created in the 1940's or 1950's. Donald measures 0.75"x1.75" and 2" tall, and the nephews each measure approximately 0.25"x1" and 1.25" tall. All four pieces are in good condition overall with wear from age. One nephew in particular has additional wear with a repair visible in the feet. Through the 1940s and 1950s, the Evan K. Shaw Pottery company and its sister companies, Metlox and American Pottery, produced a wide range of ceramics. In 1943, they were granted approval as a licensee to produce a range of Disney characters. These companies are no longer in business, and their highly desirable figurines are increasingly rare.