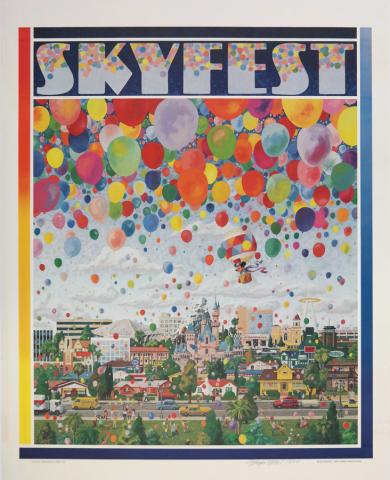 This is a limited edition lithographic print entitled "Skyfest" by Charles Boyer. This print was produced in 1985 when Disney celebrated the 30 year anniversary of the Disneyland park by releasing one million helium balloons into the skies of Anaheim. This print was created for cast members only, with only 1800 prints created for the edition. The print features Mickey Mouse in a hot air balloon, among the release the balloons in the Anaheim skies, above Disneyland. and measures 27.5" × 22" overall with the image area measuring 24.25" x 20". The print is hand-signed by Charles Boyer in the lower right corner and hand-numbered. The print is in good condition with edge wear and discoloration in the margins.